On July 8th, 2018 Travis Pastrana performed three legendary stunts on live tv in an epic, adrenaline-packed homage to Evel Knievel ending with the most dangerous of all, the jump over the Caesar’s Palace fountains, a stunt that almost killed Evel when he attempted it in 1967.

Two months before Travis’s jaw dropping announcement, the History channel (who was to air the event) reached out to Beverly Hills Aerials in order to create a one-of-a-kind cinematic trailer.  Their request was simple, to get an epic one-take shot using the Alta 8 heavy-lifter drone carrying an Arri Alexa Mini that reveals Travis Pastrana looking out in preparation over the Caesar’s Palace fountains on the Las Vegas strip.  Like most things, its rarely as easy as you anticipate it to be.

The entirety of the Las Vegas strip is contained within class B or Bravo airspace because it’s within close proximity to McCaren International Airport.  This means it’s highly restricted and essentially a no-fly-zone for normal drone activities without an FAA airspace waiver.  It just so happens that Beverly Hills Aerials had already applied for and received this highly sought after waiver which typically take 6-9 months just to receive an approval or denial after submitting.

As you can probably imagine, with a population density like the one on the Las Vegas strip, there are a million wireless signals floating through the air. Devices like wifi routers + boosters, bluetooth, all sorts of wireless video signals, and some cell phones all run on the same frequency bands that we use to operate our drones and see what the camera sees.  What this means for us is that our drone, gimbal, and wireless video signal operating range are drastically reduced.  We anticipated the RF (radio frequency) environment to be loud and added the best antennas we could find to all of our systems to extend range as far as possible.  During the shoot we found we couldn’t fly more than about 200ft away before most systems failed.

Additionally, we were flying a brand-spanking-new lens to the industry called the EZ-1 by Angenieux.  A 4.7lb 30-90mm T2 cinema zoom lens, it was both the heaviest and longest focal length lens we’ve ever flown, pushing past the octocopter’s maximum all-up-weight of 40lbs.  We had conducted a few tests before shoot day and were confident that our setup was set-ready and certifiably safe.  That being said, flying overweight and starting the shot extremely tight on Travis at 90mm made operating extremely difficult for both Pilot and Camera Operator.

After the day was through, against all odds, we were able to execute two beautiful, stunning shots that achieved what our client was looking for in a one-shot advertisement for the upcoming stunt.  Take a look below to see the final commercial 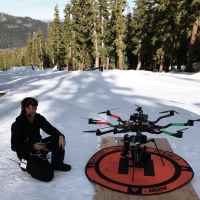